A New Year A New Start 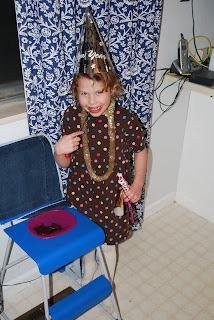 Aly bringing in the New Year enjoying some chocolate fondue
I haven't been great at posting past blogs. I have decided that as of the New Year I will just start fresh and slowly add in past blogs to catch up for the last six months.
This will definitely be a January to remember, although to be truthful there are a lot of things about it that I would like to forget.
We brought in the New Year celebrating with cousins, eating great food, and visiting with family. The girls highlight was having a dance party with glow sticks in the dark, setting off poppers, and toasting in the New Year at 9:00pm (we didn't think they would make it to midnight and wanted to give them a chance to enjoy the festivities). The kids were all set up with a movie and once they were all snuggled down and ready to crash. We decided the adults could play some games. We were in the process of getting set up for a game when Dwyn took a fall against the fireplace, and split her eyebrow. We loaded the kids up and headed home. I stayed home with the girls and Foote headed off to the ER with Dwyn. Because she was so young the hospital decided to glue her cut together instead of stitches. So Foote welcomed in the new year in the ER. 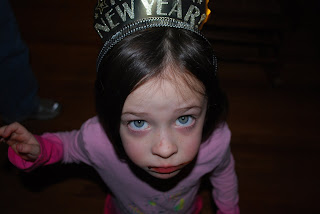 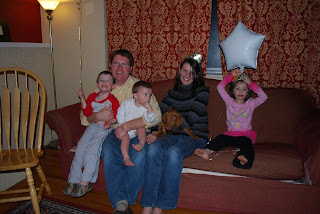 Preston and his family posing for a quick New Years photo 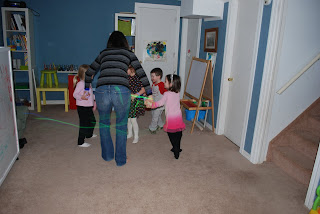 Aunt Shanda leading the glow in the dark dance party. (I am not an expert enough on my camera to make the shot dark and still catch the action.) 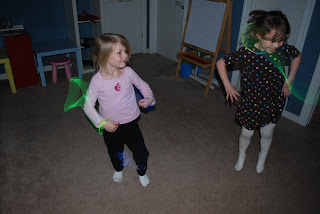 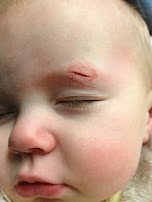 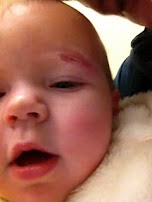 Hopefully this start to the New Year is not a sign of things to come. The next few weeks have just become a blur of projects and craziness. We moved from our town home into a house not to far away with a little more room. While it is nice to have more room the house is an older home and moving from a new build home has made us realize that wee were spoiled in many ways. We spent about a week with the help of family painting and cleaning the house to move into. And the next week moving and cleaning the house we moved from. I have decided that I am not a mover I am going to need at least five years to recover before we can even consider moving again.(I don't know if I will be so lucky, but one can wish right?) I am grateful we made the move now. If I was any more pregnant I think that would have just added to the stress of it all. We are now moved and everyday we try to live our normal routine and wade through the mess of boxes that still need to be unpacked.
Meanwhile life goes on and about a year ago I purchased a month of unlimited dance classes for the girls it was a really good deal a whole month of classes for $20.00. I had planned to use them up in the summer, but never did. The offer was only good for a year so this month I have also had to cram in dance classes with everything else, but it has probably been a nice break for the girls to get away from the chaos of moving. The only problem has been that I really did not have any extra time to take them. Despite all the craziness we have survived January and hope that the rest of the year is not as crazy as the start.
Contributed by the Amazing Camille Foote at 1:20 PM

Who's in Our Network